Percy Cane was an English garden designer and writer, born and educated in Essex, studying both horticulture and architecture. This combined knowledge no doubt explains his style of garden design which incorporates a great deal of architectural hard landscaping alongside rose gardens and sweeping flower beds.

He had a long and distinguished career and frequently participated in the Chelsea Flower Show where he won many medals, including 8 golds, for his garden designs. In 1963 he was awarded the RHS’s Veitch Memorial Medal, in recognition to his outstanding contribution to the world of horticulture. As a writer, Percy published four books on gardening and was also the owner and publisher of two horticultural magazines, namely My Garden, Illustrated (1918-1920 and Garden Design (1930-1938).

Percy’s work as a garden designer began in 1919 with a largely Arts & Craft style, drawing inspiration from Harold Peto’s work. Within a decade he became one of the most sought-after designers, with a portfolio of work including the Jubilee Palace of Haile Selassie, the Emperor of Ethiopia, in Addis Ababa, to a tiny town garden in Taptonville Road, Sheffield. Other notable commissions included: 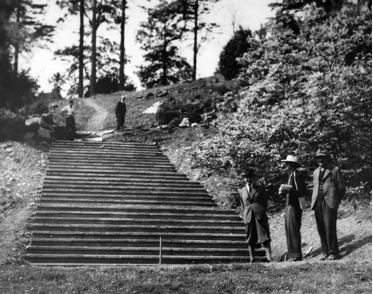 In 1935 Percy was commissioned by Major and Mrs D MacGregor McGrigor to design the gardens at their home, Ardchoille, based in Frinton-on-Sea, Essex. The original design featured 2 terraces, a rose garden, stream and kitchen garden with numerous flower beds and trees throughout the 1.6 acres of gardens. Westmorland stone was placed along the banks of the stream. Unfortunately, being sited on vulnerable clay, Ardchoille along with the initial terrace fell victim to subsidence and have long since gone. Today, a 30 year old house sits on the site proudly overlooking Percy’s original rose garden, sloping lawn, stream and a collection of significant trees. Some of the original borders are being reinstated along with yew hedging, clearing of the stream and renovation of the rose garden and terraces.